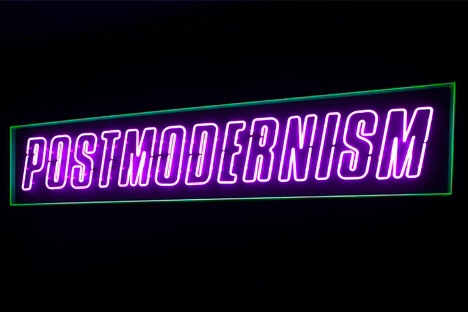 As an intellectual movement, the record of postmodernism has been … ambivalent.

If you’re unsure of what postmodernism is, and don’t know what to make of it, don’t worry, neither do most postmodernists. One philosopher, Jean-Francois Lyotard, once summed it up as “incredulity towards meta-narratives”. In other words, a lack of faith in big ideas; in grand all-encompassing theories of how the world works; in “ideologies” in the negative sense of the word. What’s postmodernism post? I guess big ideas. These big ideas are monsters. They’ll get you killed son.

It’s had a range of applications in the arts, in philosophy, in the sciences, and in culture in general. More often than not, a postmodern sensibility comes across more as a vague and general feeling than a specific set of signifiers or themes. Which is, it could be argued, part of its ethos, if it could be said to have an ethos.

My own first exposure to the term was an episode of The Simpsons, in which Moe opens a new bar featuring rabbits suspended from the ceiling and monitors with cartoon eyes looking at patrons. When quizzed by Homer about what’s up with all the bizarre stuff the bar is now filled with, Moe responds that it’s “Po-Mo – Postmodern”. When his evocation of the term elicits blank stares in response, he defines it as “Weird for the sake of weird”.

While that’s intended as a joke, and a bit reductionist, it’s not inaccurate given postmodernism’s proclivity towards doing stuff without any clear rhyme or reason, blending the semiotics of popular culture and niche cultures into eclectic collages, and then acting like the process of collage itself is the point. To invert Marshall McLuhan’s famous saying, the message is the medium.

Another way of describing postmodernism might be summed up in the sentiment sincere fakery is preferable to fake sincerity. A recognition that we live in a world of artifice and might as well embrace it. All information is, to some extent, a lie, as our very social reality is made up of constellations of social constructions which may aim at truth, but can’t ever capture it. So why front? Embrace the world of knowing lies. At least if you know it’s all lies, you can choose to believe in the lies which bring you the most fulfilment.

Given that it emerged as a mutation of modernist and structuralist thought in the wake of World War II and in the midst of the Cold War, it was probably an understandable counter-reaction to a world suffused with competing totalitarianisms – each one claiming to have access to the unmediated Truth with a capital-t. Capitalism, Marxism, fascism, and various religions all claimed to be the salvation of the human species, and all nearly destroyed it. All leviathans. All monsters.

At best, postmodernist thought engendered a healthy scepticism toward established authorities and dogmas, acknowledging how what we know about the world is always, to some degree, constructed, not merely discovered. Our knowledge is created in a manner similar to re-creating a crime scene for a documentary: we can try to get it as close to the reality of what happened as we can, but they’ll always be some degree of omission and embellishment.

At worst, it led to an unhealthy contempt for the very idea that some things are more true than others. It also fostered an attitude which results in believing the only reason certain claims about the world gain acceptance is because they serve the powerful, never because they might just accurately describe the world.

In the arts, I’d say its influence has been mostly positive. The 90s and 2000s trends of pastiche and irony have allowed us to look at genre and tropes in new ways, with the cynical eye of postmodern fiction forcing us to confront the phoniness of late capitalist society in a manner that would make Holden Caulfield proud. Just as the New Hollywood of the late 60s and early 70s served as a useful and needed demolition of Old Hollywood optimism, postmodern works like Barton Fink, The Matrix, and Distant Voices; Still Lives served as a much-needed corrective to the assuredness of the Reganite 80s. Sometimes, like a watch, you need to take culture apart to see how it ticks, even if you destroy the beauty of the original item. That’s what postmodern art has set as it’s mission.

In the humanities, its influence appears to have been a mixed bag. Postmodern philosophy and literary theory has waged war on absolute certainty and enabled more marginalised voices to talk back to the affluent nonqueer white guys who’ve long confused their particular take on the world with objectivity and universality. But the instinctive distrust for truth has also led to the dismissal of many traditions of the past which still have much to offer. To offer an example from my own sphere of study, the tradition of poststructuralist anarchism (or “postanarchism”), associated with writers like Saul Newman and Todd May, has dismissed almost the entirety of classical anarchist theory as “essentialist” and “humanist”, often without reading carefully to see that they’re just reinventing insights offered by Peter Kropotkin and Emma Goldman.

In the sciences, I think its influence has been horrible and destructive. When I heard the story about Bruno Latour denying an ancient Egyptian king could have died on an illness that hadn’t been “invented” yet, I knew I could never take it seriously again, at least not as a method of scientific inquiry.

Postmodernism served a historically useful purpose to a large extent: rebuking the pretensions certain ideologies had to speak in terms which were universally true. It also provided the intellectual frameworks for many oppressed social groups to understand and critique the culture which tried to make them into people who were “less than” the dominant social group. Queer theory for example is arguably a product of poststructuralist philosophy.

However, we now live in an age where we desperately need a focus on discerning true from false. The powerful now seem to be relying less and less on absolutist ideologies and more on self-contradictory mishmash ideologies, designed to make speaking truth to power impossible – because truth itself isn’t regarded as a value. Rhetoric replaces reality as the standard by which claims should be judged in the public realm; think of Donald Trump and Milo Yiannopoulos, hucksters who make a farce of the very notion that statements ought to correspond to reality.

If the initial hope was for “post-truth” to disarm the powerful, it’s failed. The powerful can just as easily take advantage of the idea that truth is unfixed and created through discourse, taking command of the discourse as a means of shaping “truth” to enhance their own clout and dominance. The sleep of reason has brought forth monsters.

We now need to abandon postmodernism – both as an aesthetic and intellectual discourse – with something which acknowledges how truth is mediated by our values, but which also views truth itself as a value. We might not be able to gain knowledge of the world which corresponds 100% with whatever is “out there” beyond human perception and cognition, but we can at least try to make our knowledge as close as we can to something resembling objectivity. Sure, our search for truth may be tinged with biases, and we can start with owning up to it so as to better check them in case they lead us astray.

What’s “post” postmodernism? I’m not sure. In the arts at least, there’s about a dozen different modernisms floating around ideaspace as alternatives: metamodernism, remodernism, transmodernism, altermodernism, neomodernism, and whatever else they can come up with before they’ve exhausted all the Greek and Latin prefixes in their etymology dictionaries. Add to these the tradition of new sincerity and the focus on “reconstruction”, as opposed to deconstruction of older artistic tropes – aiming to take onboard deconstructive and poststructuralist critiques, while still searching for what was good about the past and striving to reconstruct it in a new context. Gone is the focus on cynicism and sneering at earnestness, in is a cautious hopefulness and a renewed sense of sincerity.

In the sciences and humanities, there’s already been some interesting approaches suggested in the forms of Roy Bhaskar’s critical realism and in object-oriented ontology, both of which have set themselves the epic task of trying to course-correct everything that’s gone wrong in philosophical thought since at least Kant; rejecting the traditional dichotomy between the real world and human experience, but without retreating into a naïve realism which fails to take account of how our values affect our knowledge.

It’s my hope that these parallel movements will grow closer and, at some point, merge. This merger of cautious hopeful sincerity in aesthetics with cautious hopeful realism in the sciences and humanities will (I hope) result in a cultural outlook which balances an appropriate degree of doubtfulness with an appropriate degree of drive for something better.

This “something better” is, as of now, something we’re still figuring out. We can only get vague glimpses of it on the edge of our consciousness. It doesn’t exist yet, but we’re making it, sometimes on purpose, sometimes by accident. We create it one step at a time as we negate what’s come before and propel ourselves into the unexplored beyond. As we explore, we should try to be cognisant of what’s worth keeping from the past, and what we need to invent anew. We need to be careful. After all, too many times before, generations think they’ve made something entirely new, only to end up reinventing tired old authoritarianisms. We’re careful, but also daring. We’re excited by the process of creation and the vitality of betterment. “Pessimism of the intellect; Optimism of the will”. This is a time of monsters. But some monsters make great pets.

7 thoughts on “Postmodernism in a Time of Monsters”