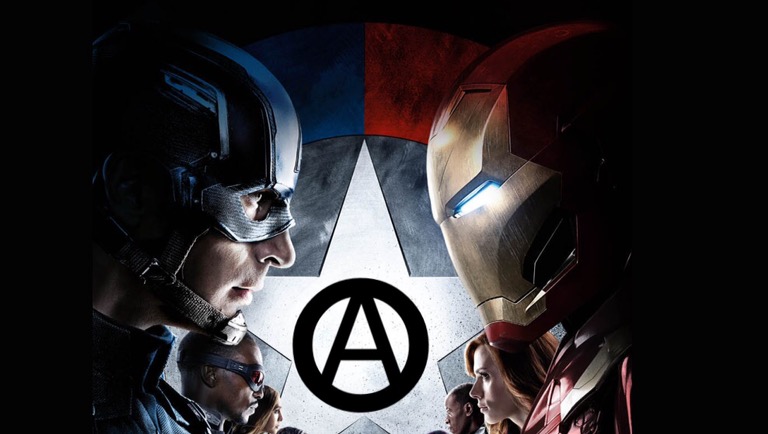 First of all, after the colossal disappointment that was Batman v Superman, Civil War is a welcome antidote to the residue of “stank” left over from Zack Snyder’s too-dark and meandering neocon mess of a superhero film. This movie proves to be just as good as the last Captain America movie, The Winter Soldier, and if counted as an Avengers movie (which it sort of is) it’s easily the best one. Well-paced, brilliant integration of practical and digital effects, and with just the right blend of increasing darkness and tension-breaking levity; which the Marvel Cinematic Universe (MCU) needs at this maturing stage in its development.

Watching Civil War as a social anarchist however reveals a number of interesting points which probably wouldn’t be apparent to the liberals and centrists this movie was made by and for. Many fans will likely deride this analysis as yet another case of “social justice warriors” reading politics into everything, to which I say: the politics are already there, most just mistake tacit support for the dominant ideology with the lack of an ideology.

To start with, the conflict itself which forms the basis for the split in the Avengers. The tension which emerges from our team of superheroes (or “enhanceds” to use the MCU’s lingo), over whether they should be able to act autonomously or be subject to legal authority, was interesting from the inception but was handled appallingly in the original comics. Both sides ended up looking bad because of the lack of coordination between writers, and Iron Man – designated the official party in the right – ended up becoming a total fascist and throwing anyone who disagreed with him in inter-dimensional gulags.

Here however, the issue is handled with a surprising degree of thoughtfulness for a summer blockbuster. Rather than one side of the debate being deemed the de facto “good guys”, we get a fair hearing from both sides, with each airing legitimate pros and cons of their respective positions. The pro-reg side are shown to have a point with regard to the lack of oversight they face relative to the amount of damage they’re capable of causing; and have caused. The anti-reg side on the other hand are correct in questioning the implications of being told what to do by people who don’t know the situation as well as they do, and the possibility of being forced to do something horrible if ordered to by an external authority.

Here, the movie also makes the split more than just ideological, as there’s now also the element of behind-the-scenes manipulation by a third party.

It’s also nice for the MCU to finally address the facts that:

1) the Avengers have caused untold destruction with few actual consequences on their end,

2) they operate on their own authority from within the US and routinely ignore the territorial sovereignty of other nations, and

3) there does seem to have been a correlative increase in the amount of potentially Earth-destroying incidents since they showed up.

But what is a social anarchist to make of all this?

Well, anyone of an anarchistic sensibility would agree that Steve (Captain America) makes a good point about the United Nations being made up of “people with agendas”. He’s seen how SHIELD was infiltrated by the fascistic Hydra and is presumably worried about something very similar happening to a superficially protection-based institution. The Avengers could indeed be ordered to do something awful by the UN, like being forced to use their superpowers to crush resistance movements the world’s major states disagree with. Who’s to decide if a force of socialist revolutionaries in Wakanda are “terrorists” or freedom fighters? The X-Men aren’t part of the MCU, but I’d agree with a sentiment once expressed by Wolverine about terrorists merely being “what the big armies call the little armies”.

So would an anarchist then side with Cap and his team of underground rebels on the issue of superheroes being allowed to act autonomously? Not quite.

In the world of the MCU, the Avengers are the human equivalent of nuclear warheads. They are “weapons of mass destruction” personified. The statist United Nations is hardly a form of public oversight which actually represents “the public”. Rather, it represents the interests of each nation-state’s governing classes. But still, the fact that superheroes, with their capacity for destruction, can act without being in any way accountable or controllable by the ordinary people they allegedly aspire to protect is a huge problem.

Yes, one could argue that their powers make them a necessity in the context of a planet now routinely under attack from alien and inter-dimensional threats. Though that’s not the only function they serve. In the second Avengers movie, where the team is shown to have been at their jobs for a few years, it’s mentioned that they’ve spent a lot of their time taking down “arms dealers” – a very non-superhuman problem. But isn’t it worth asking (at the risk of sounding like Britta from Community), what are they dealing arms for in the first place?

You see, the MCU is set in an alternative timeline where things are, for the most part, exactly like they are in this timeline – but with the addition of superheroes (and Hell’s Kitchen not being gentrified). So then there still exists an authoritarian capitalist state system, draining the planet dry for its natural resources and waging imperialist wars to feed the ever-growing beast of capital accumulation and statist power-lust – but, again, with superheroes.

The problem with Steve and Co., fearful of being commanded by “people with agendas”, is they see their own autonomous initiatives to protect people from threats – superpowered and not – as being value-neutral. After all, surely taking down “bad guys” isn’t political. It’s just the good thing to do in a very commonsensical way. This however reveals something telling about statist ideology: it doesn’t see itself as ideological.

Let’s take the purely superpowered threats out of the equation for a moment. What is making these so-called “bad guys” act in the way they do in the first place? Arms dealing and non-state terrorism are both connected to the global drug trade, itself a result of the prohibition of recreational drugs in almost every state. If drugs were decriminalised worldwide, then the Avengers would have considerably fewer arms dealers and terrorists to go after.

What about the pimps, drug dealers, wife-beaters, and gangsters Daredevil, Jessica Jones, and Luke Cage beat up? You don’t have to be a bleeding-heart leftist to consider that most are a product of a cocktail of factors related to economic inequality. New York doesn’t look the way it does in the Marvel TV series for no reason. It probably suffered the same brutalising effects of neoliberal economics the real New York did in the 1970s and 1980s; making class hierarchies even more stratified, breeding unemployment and resentment, and leaving organised crime looking like a viable alternative to legitimate (capitalist/statist) employment. Not to mention the psychological effects of this stratification which turn people into violent abusers and drug-addicts in the first place. Somehow, it’s hard to picture Daredevil taking place in Oslo, where the problems of economic insecurity and class stratification aren’t as horrendous.

Superheroes, with regard to non-superpowered problems, aren’t merely neutral do-gooder protectors of the people. By never challenging the systemic problems which give rise to the criminals they knock into walls, they are, effectively, upholders of a deeply hierarchical and authoritarian set of social relations on a national (American) and international scale.

Captain America is right to be cautious about “people with agendas” telling him and his allies to use their superpowers for nefarious purposes, but he’s unable to see that he has an unrecognised set of agendas himself. Maybe due to political and economic naïveté, but still.

In many ways he was more on the mark during The Winter Soldier, where he opposed the illegitimate freedom-restricting acts undertaken by SHIELD, even before they turned out to be secretly run by a bunch of Nazis-not-Nazis.

You see, there already is just such a freedom-restricting institution in both this world and the MCU: it’s called the global state system and capitalist economy. Built on a legacy of slavery, imperialism, colonialism, and ecocide, from a social anarchist perspective the best thing superheroes could do, if they’re going to exist at all, would be to use their enhanced abilities to help inspire a planetary popular uprising against capitalist-statism – then use their powers constructively to help build a post-scarcity economy of the commons. This would effectively eliminate about 90% of the things they beat people up for.

Tony Stark could probably use his resources and technical know-how to create a giant supercomputer capable of fully-automating almost all human labour and provide an abundance of needs-fulfilling products for the whole planet, rendering even money unnecessary; like a version of Ultron used for universal well-being instead of destruction. Instead, he uses everything at his disposal to protect his own property and power, and to “privatise world peace” in his own hands.

Civil War’s very own writer Mark Millar (on a better day) even wrote a Superman comic imagining what it would be like if Supes was born on a collective farm in the Soviet Union, becoming a pawn of Stalinism and later a totalitarian dictator in his own right. Fantasy author Brandon Sanderson likewise wrote Steelheart, a novel in which superheroes become the new ruling class over ordinary humans instead of the benevolent protectors of them.

Willing or unwilling, superheroes have long history of being the enforcers of centralised mechanisms of power, reconstituting the status-quo and by extension protecting the powerful against the disempowered.

This isn’t to say that superheroes themselves are an inherently capitalist or statist or authoritarian concept. Don’t forget, Superman’s first villains weren’t mad scientists or aliens, but corrupt businessmen and slumlords. V, from V for Vendetta, is the rare example of an anarchist superhero who fights for popular liberation and an autonomous self-organised social order. Even in the real world, many ordinary people don superhero suits in a symbolic fashion to feed the homeless or take care of their communities.

Just as they can be tools of the capitalist state system, they can also be champions of the oppressed. It depends on what purpose they end up serving.

Though if a team of genuinely social anarchist superheroes ever popped up in the Marvel Cinematic Universe, it’s likely the Avengers would be dispatched to get rid of them before they could pose a threat to the interests of the global state system; eventually being thrown in one of Tony’s space gulags. While our (A)vengers and the rest of the superhuman crew would likely end up on the same side in the event of extraterrestrial or inter-dimensional attack, this would only be for the same reason the anarchists teamed up with liberals and Marxists in Italy to get rid of the fascist occupation. While Iron Man and his posse are busy firing electro-blasts at poor people, the anarchists would be trying to destroy poverty through superhuman and super-legal means.

(And *spoilers* this isn’t even getting into the fact that Stark himself is clearly an unstable mess of a human being. Seriously Tony, we know he killed your parents and you’re obviously upset, but what part of “he was under fucking mind-control and had no choice” is not clear to you?)